Coral cannot survive on its own for long. It needs to create a symbiotic relationship with algae to survive. Algae provides approximately 90 percent of the energy coral needs, which means that their partnership must be preserved in order to keep the coral healthy. In order to protect coral, algae, and the marine species that live in reef environments, scientists need to know more about how the symbiotic relationship between coral and algae begins. In collaboration with Amin Mohamed and Prof. David Miller at James Cook University, Prof. Noriyuki Satoh and Dr. Chuya Shinzato of the Okinawa Institute of Science and Technology Graduate University (OIST), found changes in coral gene expression when introduced to algae. They have recently published their results in Molecular Ecology.

The only time when coral does not have an algae symbiont is during the larval stage. When the symbiont is introduced, which happens naturally in the wild, the coral absorbs the algae and the algae continues to live within the coral cells for the remainder of the coral’s life.

“We wanted to investigate the gene expression changes when the symbiosis starts in the coral larvae,” Dr. Chuya Shinzato, co-author and group leader of OIST’s Marine Genomics Unit.

Previously, it was thought that in the time when the algae were introduced to the coral, there were minor changes in gene expression. However, using the latest technology in genome analysis and checking many different time points following the introduction of the algae, the team discovered that changes in gene expression did occur in coral during symbiosis, but these were only detected at four hours after the first interaction with the symbiont. Past studies had missed this window of gene expression, as they had looked only at later time points: 12 and 48 hours after first interaction.

“This study succeeds in analysing the very early stages of coral symbiosis,” Shinzato said. “We saw suppression of the genes related to mitochondrial metabolism and protein synthesis, which means that the metabolism stops working for a short time.”

This means that the coral has to adapt and react to the introduction of the symbiont, instead of passively accepting the algae. 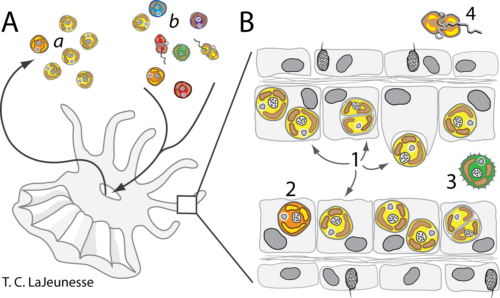 “The coral has to change its cell conditions to adjust to the symbiosis,” Shinzato said. “Coral needs to prepare to welcome the symbiont. Then, the mutual relationship can begin.”

“About 25 percent of marine species live in the coral reefs,” Shinzato said. “If coral reefs disappear, it means that those marine species will also disappear. The symbiotic relationship is the basis for these ecosystems, which is why it is so important to study. We must understand the mechanism of coral symbiosis in order to combat coral bleaching.”